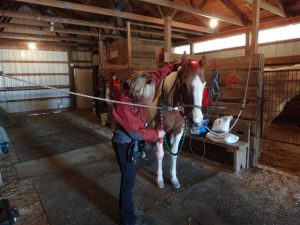 There are basically 2 types of lasers in the medical community. Surgical Lasers and Therapy Lasers.

Surgical Lasers are well known and can cut tissue precisely. This cutting is due to the higher power and heat generating effects resulting from a ” PHOTO-THERMAL Reaction.

Therapy Lasers are called ” Cold Lasers” to differentiate them from Surgical Lasers. They generate a PHOTO-CHEMICAL Reaction. Light energy in the violet to red area of the visible light spectrum has been found to induce physiological responses in cells via the activation of specific enzymes. This response is called BIOSTIMULATION.

Light energy of a specific wavelength , that is coherent (polarized) and focused, is absorbed by photoreceptors on cell membranes. The mitochondria ( cells “engine” so to speak) are stimulated to produce more ATP energy. A cascade of cellular chemical reactions occur which results in increased regeneration of cells and increased cell communication. This translates to enhanced tissue healing and decreased pain and inflammation.

This rehabilitation at the cellular level works best as an adjunct to other building blocks for healing. Good nutrition, hydration, omega fatty acids for healthy cell membranes, exercise for improved circulation and lymphatic drainage, and mental enrichment, are all integral to optimal healing.

NOT ALL THERAPY LASERS ARE ALIKE

First, there are many devices out there claiming to be “lasers” that are nothing more than red lights. The properties of a laser are specific, and EXPENSIVE to construct. A “TRUE”Laser requires that the light energy be monochromatic ( single wavelength or color) that is coherent ( all wavelengths in synch with each other) and directional ( focused ). It is these properties that allow the cascade of cellular reactions that result in improved wound healing, pain management and decreased inflammation. It should raise a RED FLAG ( pun intended) if the ” Laser” device is under 5000.00. It is probably an LED or Light emitting Diode. These do have some ability to benefit surface skin, but at a fraction of the abilities the Laser is capable of. They are not as expensive to construct, and that 5000.00 “laser unit” is undoubtedly an overpriced LED. Unfortunately, there are no laws at the present time that over see this false advertising and it is up to consumers to do their homework.

While it is true that these lasers do promote deeper penetration of the photons, the trade-off is the power needs to be higher to affect a cell response. The higher power generates heat deep within the tissue. This is not beneficial to all tissues.

Another risk involves the concern for eye protection. The longer wavelengths are invisible and do not trigger the blink response. These properties result in the need for eye protection for the operator, patient and client within 20 feet of the operator. The heat within the tissue does allow for reducing muscle aches and pains, as well as vasodilation which can aid in wound healing. Unfortunately, due to the heat generated, there are serious restrictions on where high power lasers can be placed. It is contraindicated on the endocrine system, gonads and tumors. Restrictions to only areas where tissue heating is acceptable is a no brainer.

Studies are supporting more and more that Low Power Laser delivers a myriad of benefits beyond decreasing pain and inflammation due to the cascade of cellular chemical reactions previously described. It promotes these responses in a manner that does not produce heat. 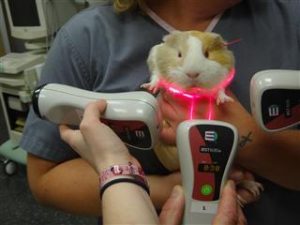 Dr. J has done extensive research in the over 7 plus years of performing Low Level Laser Therapy and feels satisfied with the benefit and risk assessment she required in order to feel comfortable with her choice of the Erchonia laser system. The lasers recieved FDA Market Clearance in humans for relieving neck and arthritis pain ( 2002), as well as treating Acne ( 2004). In the human field, these lasers are used in burn units to enhance wound healing, sports medicine teams for enhancing performance, and many chiropractic and rehabilitation medicine clinics. With all the documented therapeutic results and no risk of causing harm, the decision was clear. 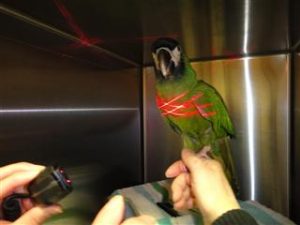 The Erchonia Lasers used by Animobility are manufactured in the USA in McKinney Texas. These lasers incorporate a wavelength of 635nm which is the wavelength researchers have found to be most effective at “speaking” to tissue cells. Low power at 5 and 7.5 milliwatts allows for the appropriate power to support Biostimulation without the risks of tissue heating and retinal damage. The linear beams allow for more contact with the area of involvement, as well as simultaneous application to nerve root or spinal segment for a more complete treatment response.

Dr. J has performed LLLT on over 1500 patients that included dogs, cats, horses, birds, rabbits, guinea pigs, wildlife and other exotic species demonstrating benefits in the conditions above. 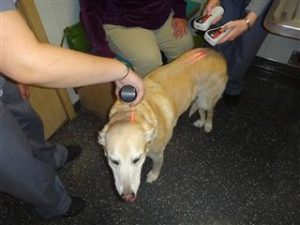 LLLT is used to rehabilitate at the cellular level, and is a great tool to use as an adjunct to other forms of treatment. The Laser treatments would involve 120-180 second ( 2-3 minutes) durations and up to 4 sets can be applied depending on what issues your pet may be dealing with. This set of treatment sessions may be repeated later that day to kickstart the healing. A protocol will be set up for repeat visits depending on the severity, or chronicity of the condition. Some conditions may only require only 1 or 2 treatments in order to expedite healing. Examples of 1-2 treatment conditions would include fresh wounds, incisions, stiffness, muscle aches and pains, or some acute injuries. Chronic conditions such as laminitis, osteoarthritis, partial or complete ACL tears, post-op orthopedic surgeries, intervertebral disc disease, may require multiple sessions. Generally 6-13 treatment sessions spaced out within 2-8 weeks would be recommended and mapped out together. Cost effective individualized treatment packages are constructed in order to offer the most effective optimum outcome. Since many of these chronic conditions are in need of continuous management, a maintainence schedule of 1- 2 treatments every 2-4 months can prevent relapses.

Please visit Erchonia.com for more information on low level laser therapy, to find a human practitioner near you, and to review the science and clinical research. 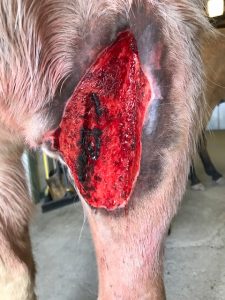 1 month duration before start of LLLT 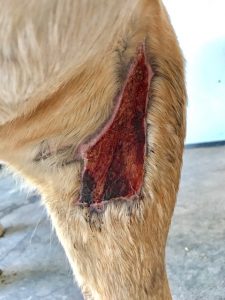 3 week’s later after 2/week LLLT, able to be ridden with normal light riding 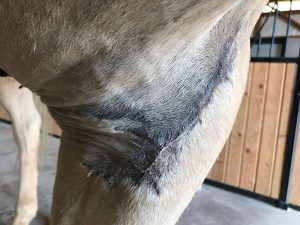 Fully functional 3 months later with no lameness or restriction of range of motion. 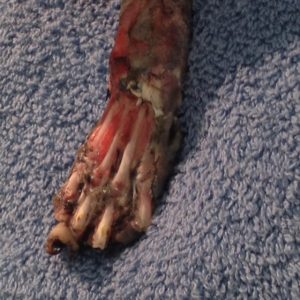 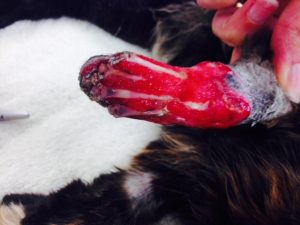 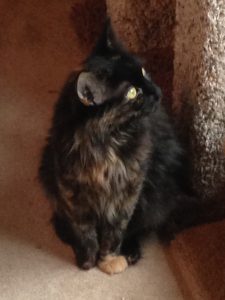 This young cat found on the road after being thrown out of a moving vehicle. We started LLLT treatment on her twice weekly 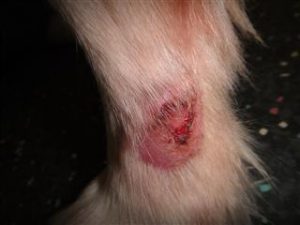 Lick granuloma on day one 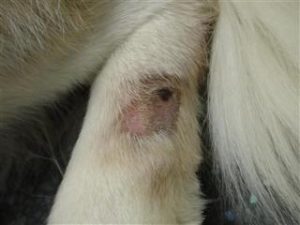